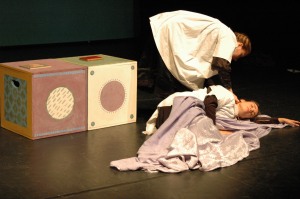 This is a play based on Susan Sellers’ novel about the artist Vanessa Bell and her fascinating, complex, extraordinary relationship with her novelist sister Virginia Woolf.  This beautiful adaptation by Elizabeth Wright for two actors, and involving a moving backdrop based on Bell’s paintings is being produced by Moving Stories, and I’m writing the music.  We’ve now started working on it, and the process is rather different from how I usually write.  When I arrived after two weeks of rehearsals the actors and director had already done much wonderful work building up character history, body language, quirks of movement and so on,  and the first few scenes were up and running.

I watched the scenes, and then asked them to run them again immediately, while I improvised on the piano, responding instinctively to the atmosphere, pace and direction of the scene.  This means losing oneself in it and not trying to retain conscious control of what one is doing.  Which is all very well, but it means that at the end, it’s often very hard to remember exactly what it was that you played, especially the bits where it really took off and flew.  The solution was to video the sessions, and then play back and write up the bits which I want to use.  Of course, from there, there’s a process of editing and fine-tuning which is more like how I normally compose.  But the main part – responding to actors speaking and moving all around me, and just playing – and has been very refreshing for me.

The play opens in Aix en Provence in September, and then tours various theatres in the UK and also Krakow til September 2011.