A little while ago I was asked to write a piece for three fine Korean musicians who are visiting Cambridge in April to play and discuss traditional and contemporary music.  They play three beautiful and fascinating instruments – Taegum, a kind of flute with a fine membrane that adds a subtle buzzing quality to the sound; Saeng Hwang, a kind of mouth organ in which the pipes stand up vertically, rather an amazing sight; and Keomungo, a kind of zither. 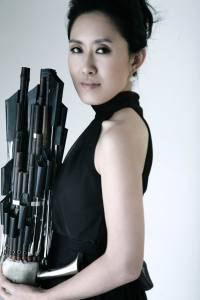 I was told that I can also include one or two Western instruments.  Initially I thought I would avoid piano, because it carries such strong memories of a repertoire (19th-century, above all) and all that comes with that repertoire (perhaps this is because I’m a pianist myself). But in the end I decided to use it after all, and try to find a way of writing for it which would integrate with the sounds of the three Korean instruments.  I’ve also added a percussion part for two bells, and temple blocks.  It’s very interesting to write for instruments from another culture, not only because of the different sonorities and idioms, but also because I had to think about how to conceive and notate the music in a way which would engage the players’ own very refined sensibilities, allow them to bring their own imagination and expression to the music, and not merely try to get them to fit into a Western-style straitjacket.

Sometimes youtube can be very useful!  Gyewon Byeon, who invited the players to the UK and will be giving a seminar on their music, lent me an extremely informative book describing the instruments in great detail, by Keith Howard.  That was essential, but of course actually seeing and hearing the instruments is irreplaceable, and here youtube came into its own…

I’ve just finished the piece, which I’ve decided to call Celadon – it’s a kind of delicate jade-green ceramic perfected by artists from Korea around a thousand years ago.  The scores have been sent off, but of course with a situation like this the rehearsals are not merely practice, but a vital chance to find out how these musicians make music, and see how I can shape my ideas so that they can make them their own, and bring the piece to its final form.  I’m looking forward to this process, and to their two Cambridge concerts, at the end of April!