Last year, after putting it off for quite a while, I finally faced up to words which are incredibly familiar to anyone who’s sung in an English church or chapel choir – the Magnificat – as I said in my post about it, they were so familiar and so inextricably associated with the musical settings they’re sung to, that it took considerable time and effort to leave all that behind and find a way to approach the words afresh. 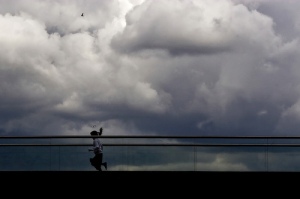 And now I’m setting them again, but this time I have something completely different in mind from the rather austere, timeless ritual quality which I tried to evoke in my first setting, which gave the words to the whole choir (men and women) all together, so that they were taken up as if by a whole community, joining together to enact a ritual as one.  This time I wanted to concentrate on the more personal and particular aspect of the scene – a young girl, alone, suddenly visited by something supernatural, inexplicable, indescribable.

I’m writing my new setting for the choir of girls’ voices at St Catharine’s College, Cambridge – which is made up of girls between the ages of about 7 to 16.  I can be fairly sure that the music will be different from a traditional Anglican setting because I am basing it around an electro-acoustic tape part created from the sounds of girls’ and women’s voices raised in laughter, shouts and song.  The actual girls of the choir sing in unison, strongly, with a kind of fierce joy, and their voices and the organ are immersed in the swirl of sound from the tape.

The choir will give the first performance in their final Luminaria (a beautiful service of based on one of the old monastic rites) of this term, on November 27th at 6.30, conducted by Edward Wickham.